Two posts in one week! Incredible! If you’ve been reading this blog for any length of time, you will recognize this as a momentous moment. Posts here are as spotty as free coffee shop WiFi. It falls just shy of the standard for miracle-worthy.

So what could justify the sudden escalation of communication?

My former lack of communication. Writer’s block, to be blunt.

You see, Wednesday’s post was weeks in the making. I meant to finish it within a couple days of the idea. Actually writing the post wasn’t that difficult. But it was more difficult letting it be read. I hesitated to publish, rereading it, tweaking a sentence here or there, waiting for the fairy dust that would make it perfect.

I was worried what people might say. I wondered if it was even relevant to this blog. I thought maybe I should keep it to myself. Maybe it was only useful to me and no one else. 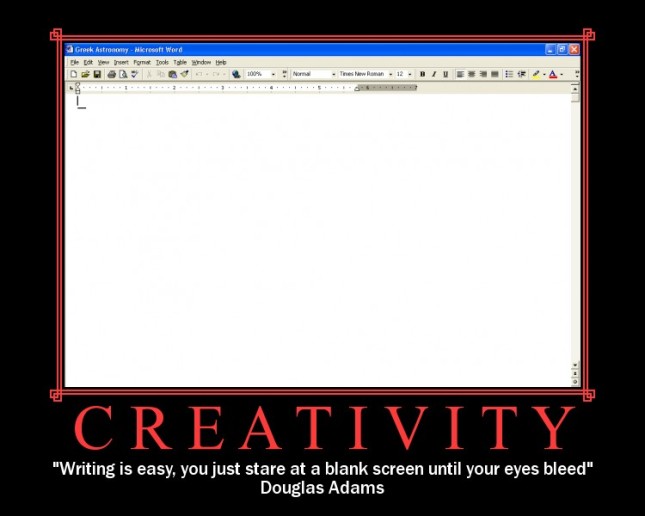 My drafts folder has other posts that may never get published. Some are half-formed thoughts I haven’t taken the time to finish. Others are a topic–a phrase or single line–more than a thesis. I told myself that my life was too busy, that I would blog more if I didn’t have so many other priorities. Meanwhile I watched other bloggers generate new posts every morning.

The same problem appears in writing beyond the blog. It’s gotten to the point that freelance articles take far more hours than they should and I’ve totally given up opening the Word document with my book manuscript.

Last Monday, toiling all evening on an over-due article, I complained to my sister, “When did writing get so hard?” Second only to Christ, being a writer has defined my identity since first grade.

I was thinking about this on Wednesday and why I hadn’t posted anything for so long. Not only could I not publish, but I couldn’t write. I am scared of typing something (which could be easily deleted) because it might not be perfect, it might be misunderstood, it might be rejected. Fear keeps me from both writing and publishing what I wrote.

My writer’s block is nothing more than fear.

I believe fear is one of our greatest dangers. Of course, fear saves us from harm, but it can also hold us back from good. The Israelites refused to go into the Promised Land because they were afraid of the Canaanites living there. They were so intimidated by the size of the Canaanites that they forgot how big God is. The consequence was 40 years wandering the wilderness instead of the land flowing with milk and honey (Numbers 14).

In the Bible, God tells his people repeatedly to not fear. Why do you think humans need this reminder so often? Whenever an angel shows up, the first thing he says is, “Do not be afraid.” When Jesus calmed the storm on the sea, he asked his disciples, “Why are you so afraid? Have you still no faith?” (Mark 4:40). After Jesus ascended, when Paul was traveling to share the good news, the Lord spoke to Paul in Corinth: “And the Lord said to Paul one night in a vision, ‘Do not be afraid, but go on speaking and do not be silent, for I am with you, and no one will attack you to harm you, for I have many in this city who are my people'” (Acts 18:9-10).

I don’t want to be controlled by fear. I don’t want to be so afraid that I miss out on the Promised Land. I don’t want fear of people to keep me from blessing them, giving them everything I have to offer–even if it’s just a blog post. It’s said we should face our fears, so it seems the best method to overcome my fear of writing is to…write.

That’s why I’m starting a new series on the Gospel of Mark.

I’ve been writing on this blog four years. I’ve reviewed several books in that time. That’s where the title “Reviewed Thought” comes from. But never have I reviewed a book of the Bible. Since Jesus is at the heart of the whole Scripture, I’d like to start with one of the gospel accounts of his life. That leaves Matthew, Luke, Mark, and John. Matthew and Luke get a lot of attention for featuring the Christmas story. John includes many stories of Jesus that were left out by the other writers. John is also known for an unique, personal voice easily accessible to people unfamiliar with the Bible. But what about Mark?

Mark is the shortest Gospel of the four, but it’s believed to have been written before the others, even being used as source material for Matthew and Luke. It was also likely written for a Gentile audience, Romans who didn’t know Jewish history or scriptures. I can’t remember ever giving Mark much thought, so I’ve chosen this Gospel for my first biblical study on Reviewed Thought.

Look for the first post on Monday. I plan to add a new post from Mark every week. Posts on other topics may appear occasionally as well, probably on Thursdays or Fridays. Hopefully this new book study will keep me accountable to write something and not let fear stop me.

When have you felt fear holding you back?

“The beginning of the gospel of Jesus Christ, the Son of God.” Mark 1:1